Today I will be discussing my recent musical love affair with the genius of Eric Dolphy and the systematic racism that jazz musicians faced in the 50’s and 60’s. As a primer please listen to the epic and emotionally moving song Alabama recorded by John Coltrane in 1963 on the album, Live At Birdland. This recording was an honest response and deeply felt eulogy to the four young girls that were massacred on the steps of the 16th Street Baptist Church in Birmingham, Alabama by a bomb that was placed there by the Ku Klux Klan. It also injured dozens of others. I would compare this tragedy in some ways to the George Floyd killing that has galvanized the nationwide Black Lives Matter movement of today. Less than three weeks earlier,during the March on Washington for jobs and freedom on August 28, 1963 Martin Luther King gave his venerable, I Have A Dream speech. Eerily a speech just as relevant for today in which he called for equal economic and civil rights for African Americans. 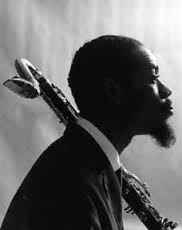 If you have never heard of Eric Dolphy or listened to his music then you are in for a real treat. The first time I heard Eric Dolphy was when I first started dating my boyfriend a few years ago. He played the album Out To Lunch (1964) and the first song on the track, “Hat and Beard” through an analog receiver and set of large speakers. My head was literally blown away by Dolphy’s bass clarinet playing. I had to ask my sweetheart repeatedly if he was sure this was recorded in 1964. Not sure if Dolphy altered my state of being or if it was something I had taken earlier, but it was like I was listening with a brand new set of ears. These new ears that I was listening through were much more sensitive and nuanced and not at all like the ones that I blew out on ersatz hair metal bands back in the 80’s and the formulaic mawkish radio hits of the decades that followed. To this day, most jazz musicians worth their salt will say that the bass clarinet is synonymous with Dolphy. He played the instrument like nobody had ever before him. It is unfathomable to me that somebody with his talent and intuitive feel went largely unrecognized as one of the best ever at his instruments. Here he is playing the bass clarinet on the song, “Hat And Beard” from the album Out To Lunch (1964). My god just listen to his jaunty chromatic soloing in the early part of the song Coltrane didn’t hit his avante garde phase until 1965 and beyond. They played together in the 60’s and so it isn’t surprising that Coltrane was inspired by Dolphy’s playing. Just listen to the huge arpeggio leaps that he plays effortlessly. His intuitive and impeccable sense of timing is otherworldly. He loved to improvise but also was a deft reader and admirer of composition. After I heard, and I mean truly heard the playing of Dolphy, Charles Mingus, and John Coltrane, suddenly almost every jam band musician that I have ever heard sounded like amateurs. Most jam bands tend to find a single key that they play over and over. Not Eric Dolphy. The freedom he utilizes to play in multidimensional phrasings while rendering chromatic tonality and improvisation is unmatched. Listen to his buoyant bass clarinet on the track “Bee Vamp” from the album Eric Dolphy & Booker Little Quintet at the Five Spot. His bass clarinet comes alive right after Booker Little’s trumpet solo at about the 4:05 mark. Listen to their contrasting styles. Here is a 23 yr old Booker on the trumpet whom died tragically a few short months later from uremia. Imagine if those had kept playing together? The interplay of the two talented instrumentalists is pure harmonic bliss. I love the deep, debonair exuberance of Dolphy’s inflected bass clarinet. It is the unabashed yang to the bright, scabrous stabs and angular scale runs to the ying of Little’s trumpet playing. Outright magic! I can almost feel the plume of cigarette smoke and the improvisational frolic and live energy of the nightclub that they played and recorded that night. This is a must listen and a superb track. 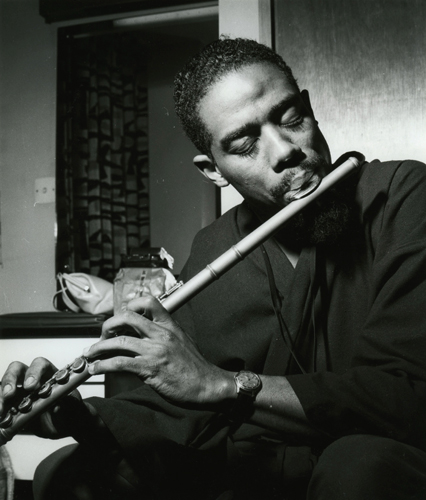 Eric Dolphy was born in Los Angeles, California in 1928. I’d suggest this amazing documentary called Last Date free on youtube if interested in learning about such an incredible talent. His aunt talks about how Eric was in every band associated group or organization he could possibly be a part of during his school years. He was awarded a two year scholarship to the University of Southern California while he was still in junior high. She said they converted their garage into a rehearsal space since he would practice all the time including late at night and early in the morning while going to school. I absolutely adore the part in this documentary at the 24:55 mark when his Aunt Luzmilda Thomas talks about his fascination with the birds that lived outside of where he grew up. Eric said that the birds responded to his music. Eric’s favorite idols were the birds and their chirping. He would later take the patterns of their birdsongs, chirping, and the musical psithurism of the trees’ leaves around him and incorporate these natural elements into his arpeggio runs and fluttering flute phrases. His former neighbor said thats how he would get all the odd notes in his flute playing. To me, as good as his bass clarinet playing is, my favorite is the way he played the flute. Listen to these two exemplary recordings to see what I am talking about. The first is the song,”Gazelloni” The second one is the doleful standard “You Don’t Know What Love Is.” “On You Don’t Know What Love Is For” he sounds like a roving nefelibata dancing along wisps of notes. Listening to this you can see why he would have done well in the Burbank Symphony for which he was qualified, but at that time blacks were not allowed to play in the symphony. Racism and exclusion had forced many American jazz musicians like Dolphy to travel and stay in Europe. Unlike Americans, Europeans recognized and were enamored by his genius. Jazz musicians have often been demonized as drug addicts and is why there is still an unfavorable public view taken on marijuana. Eric Dolphy did not take drugs or drink or smoke. Sadly he died at the very young age of 36 after moving away from the racial oppression of America to live with his wife in Paris. He died from an undiagnosed diabetic shock while in Europe. His love of composition and the symphony in essence married jazz and classical together. I can only imagine how his two passions for composition and improvisation would have played out given a longer life span. His work Musical Prophet offered some hints into it. Check out the track, “A Personal Statement” aka “Jim Crow” written by the pianist Bob Jones on the recording. It deals explicitly with the insidious racism of the day surrounding blacks through racist laws like Jim Crow laws. Quite powerful and a big leap from his earlier works.

There were some contemporaries that never “got” Eric Dolphy. His soughy meanderings, capacious interval jumps, and unique intonations often rubbed more traditional jazz players the wrong way. Often his solos would meander in and out of a song’s basic chord structures. His visionary approach to music and soloing is what led Miles Davis to famously call him a “sick motherfucker.” When most of the jazz musicians of the day were trying to sound like the bebop jazz of Charles Parker, Eric seemed to take his inspiration from classical composers. He played with an intense feeling and intensity as well. He also utilized multiphonics which allowed him to produce notes within notes and notes between the ones he played. This is something that John Coltrane would famously adopt later in his career. Like most jazz musicians Eric was almost always broke and had very little money. He often would only eat white beans since it was the only food he could could afford. His long term health was most likely affected by his poor nutrition. The same lack of money also befell Charles Mingus. Look at this tragic and famous documentary on Charles Mingus called Charles Mingus Moanin‘ If you go to the 55:00 mark you will see the heart breaking black and white footage of Charles Mingus getting evicted from his New York apartment by all white police officers. Even sadder after Mingus says in the clip that he was intending to turn his apartment into a music school for kids. It was not uncommon for the white establishment and its systemic institutional racism to cut short promising careers of black musicians. Ironically, many black artists left the states to have more freedom in pursuing their creative endeavors.

One of the things I admire the most about Eric Dolphy was his love of nature. He would play for hours by lakes and seas. He would spend hours at a time communicating with all the beautiful animals and elements through his music. He loathed all the craziness in the world going on and found respite in the outdoors. This resonated the most with me while watching the documentary. I also have found more belonging and connection to places not developed and away from all the car horns and sounds of industrialization. Eric Dolphy may never have played in a symphony, but I couldn’t imagine it sounding better than his impromptu outdoor opuses.

I am a loveable and squeezable poet and writer. I live in beautiful Oregon with my cat and boyfriend. I love long distance hiking and have completed the entire lengths of the Appalachian Trail (2002, 2014) The Pacific Crest Trail (2012) and the Continental Divide Trail in (2013). Please check out my blog, ThetigressAwakens.wordpress.com and my poetry only blog, Everydayoneironaut.wordpress.com. Cheers and have a kick ass day!!! View more posts